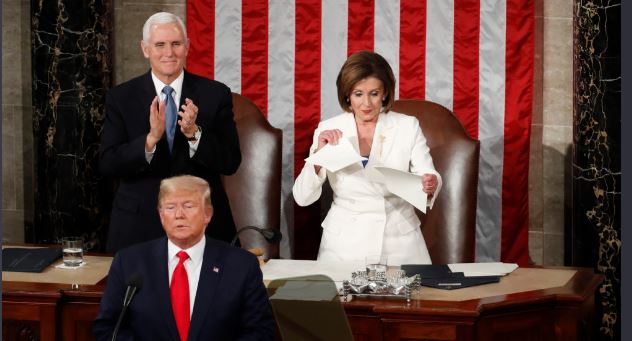 By Doug “Uncola” Lynn via TheBurningPlatform.com
Barely into the New Year, 2020 vision has brought many revelations into better focus, making several ongoing observations perfectly clear. Although there are those who’ve been watching the dots of The Matrix assemble into the big picture for decades now, the election of Donald Trump has increasingly exposed what was hidden in plain sight for so long.

The awakening for many Americans could be compared to that of actor Jim Carrey’s character in the 1998 film “The Truman Show”. In that narrative, the unsuspecting star of a global reality television program came to the realization his entire worldview was formed within a bubble; a literal bubble that generated bubblevision in Carrey’s character as all of those around (and above) him performed right on cue.

Truly, it feels like that now in America. The times have become surreal.

And there is a great percentage of Americans who still live within the bubble. They are everywhere: In the workplace, in schools and colleges and at restaurants and in bars. They vigorously debate each other on who would make a better president between Bernie Sanders, Elizabeth Warren, Andrew Yang, or Joe Biden. They LOVE the fact that Trump was impeached and consider Adam Schiff, Nancy Pelosi, and the Devil’s butler (Chuck Schumer) to be American heroes.

Those in the bottom of the bubble are also concerned about Syria’s chemical weapons and patriotically desire bombs to fall on Iran. Of course the pundits and politicians cajoling these played plebeians are all part of the act. The Establishment’s middle managers know exactly what they are doing, and they know they’d have zero leverage if not for the dupes. It’s why they use carefully crafted language to conceal their motives and lies.

There also remains the possibility of an even grander deception that involves Donald J. Trump directly, or indirectly. This prospect has caused many, including this skeptical blogger, to question if everything we are now witnessing in American politics is occurring naturally or if is there something else going on. In any event, it seems the ongoing left-right dialectics have become a diversion as the Surveillance State expands unabated.

Furthermore, it appears the Democratic Party is fracturing down the middle, with moderates to the left of us and socialists to the even further left. The warfare was front and center during the recent Iowa Caucuses. For the first time in 76 years, the Des Moines Register canceled the release of its “gold-standard” Iowa Poll after a respondent “raised concerns”. Then an app caused a coding error that tarnished the Democratic Party results in Iowa on the day of the nation’s first caucus. What were the odds of both of these occurrences happening right on cue? And the tech-firm behind the “screw-up” on Iowa’s caucus day was run by “former staffers for Hillary Clinton’s 2016 campaign, Obama’s presidential campaign, as well as Google, Apple and former DNC employees”.

Obviously, the Iowa Caucus fiasco was rigged to diminish Bernie Claus while raising Joe Biden’s stake to the minimum viability – because, just like in 2016, the Democratic National Committee will attempt to steal the election away from Sanders. Evidently, the Democratic Party elites still don’t trust a socialist to win the U.S. Presidency.

And, by the way, isn’t the following interesting:

– A gay guy who is running for president has the word “butt” in his name.

– The name of the tech firm who “botched” the Iowa Caucus results (and run by former Clinton and Obama staffers) is called “Shadow, Inc”

– While, at every turn, a former reality TV star will “Trump” them all

It isn’t ALL just made for TV, right? Because it really is happening, right?

In any event, like true versus false, or life versus death, or cold versus hot, perhaps Conservative versus Swamp Rat is a valid ideological construct upon which we can expound.

With that in mind, here are seven (7) facts that have become completely obvious since Trump’s election in 2016:

The Rest of the Story Here